thrown a spanner in the works somewhat this year.   2016 has not been a good year so far.    January was a month where I was not well and it took weeks to get over coughs, colds and eventually no voice.  I  got there in February but have yet again got another cough 🙁

February was another month where people were not well and a month of sorting out issues at home and within the family.

March was a month where my dad revealed that he was in extreme pain which meant that he had been quite depressed for weeks.  It has been found out that he had a severe hernia and is now waiting for an operation for the same.

However the worst whallop our family received was the death of my younger brother on April 5th.   Set for an important meeting at work, he rose from his chair at his desk, picked up his papers and was hit with one massive heart attack.  He felt nothing, but we however have been left reeling from his loss.  My parents are distraught.  I am still in a state of disbelief.  He was 46, had a beautiful family fantastic job and everything to live for.   His funeral was one of the most amazing events I have ever been proud to take part in.   Over 400 people at the church.     My card on his wreath meant a lot to me.  I said.  Andrew, although you have left us extremely heartbroken, you have however left us with the most beautiful memories that we will have forever.   I will miss my brother and now realise that although I was the older child, I now have a lot more responsibilities to deal with.

April has begun on a bit more of a positive note with my husband having his cataract operation and 24 hours after realising that his eyesight is so much better .

I promise I will come back to my regular blogging but needed to let you all know how this year has gone so far.

Love you each one of you: 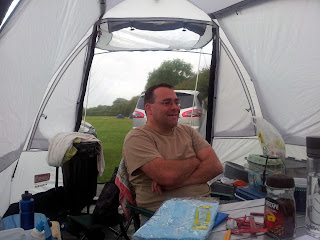 RIP Andrew Holt
May 1969 – April 2016
May you sleep in peace
Miss you loads  Our lives will forever hold a vacant place.
Share this:

Where does time fly to ?
A ‘Hotter’ Evening